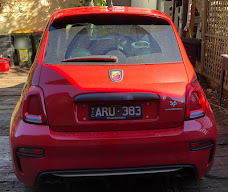 Did a bit of an impulse buy on the weekend and flew down Monday to MEL to drive back to SYD the same day in this 595 Comp. Hard to find around here with red / sunroof / manual transmission. The next day it was time to get it registered in NSW. The standard NSW plate is about the same size as the VIC plate, but I wanted something to cover up those white grommets so I went with the "Euro Style" NSW plate.

The physical process of swapping a license plate should be one of the easiest possible "mods" anyone could ever do. 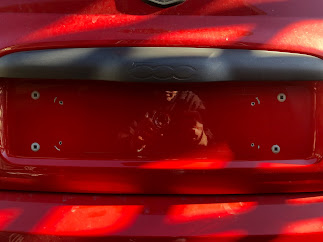 I removed the VIC plate and the previous owner had simply screwed it into the sheet metal leaving a bunch of holes and some paint damage. I covered up the damage with a bit of primer to not cause problems in the future.

Then it was simply a matter of drilling holes in the NSW plate to match up with the factory grommet locations. Interestingly it's not exactly a rectangle for some reason (if you look at the grommet on the lower right you can see it's not exactly in-line with the one above it.

With all the holes made in the plate and everything ready to go, I start screwing it into the grommet, and the first two go OK and then #3 and #4 break and fall into the gap! 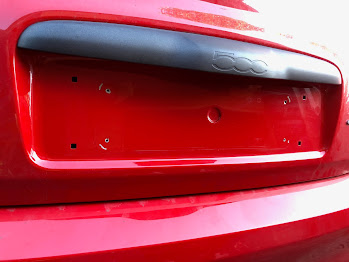 You can see from this picture that the factory holes are actually quite large. The factory white plastic grommets were so brittle that they shattered with barely any pressure and then proceeded to fall into those holes.

This actually poses two problems. First, how to attach the plate and second, which is far more annoying is that the little pieces will now be rattling in the door.

So here is what I did.

To address the first issue, I used brand new screw grommets designed for a 4.2mm hole (these are the specific ones I used). I got these at a car parts store and they actually fit perfectly as you can see in the picture. With the new grommets in place, the wider license plate fit perfectly snugly. The grommets also make the plate stand off a bit so that the plate itself isn't rattling against the bodywork. 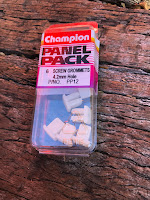 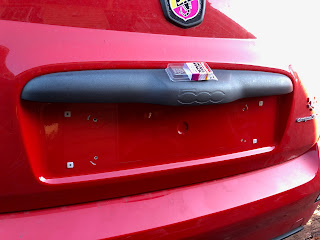 The next issue was far more annoying. The little pieces of the stock grommet were rattling around inside the deck lid and I had to get them out.

Using my trusty "trim puller" kit (this is the one I used) and a Torx driver I was able to remove the rear hatch panel. The plastic trim puller helps you pry out the plugs at the locations indicated with the red arrows. It may be possible not to need to remove all of them, but I found it easy enough to just remove them all and gain access to the area inside the hatch. The hatch closing handle requires a Torx driver to remove. 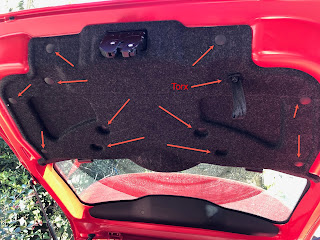 Once you've removed the panel, you get access to the interior and remove the bits that are rattling around inside.

The photos below show the bits that were rattling as well as what the plugs look like when they've been pried off. To replace the panel, simply line up the panel and press them back in place. They go in nice and snug and nobody will ever know they were ever removed. 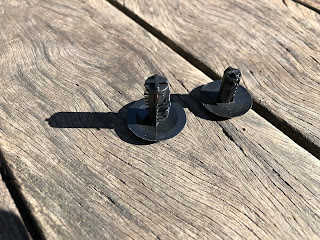 <=== These are the plugs that you pry out. There are two different sizes, so make sure you remember which one is which for when you put them back. If you do it carefully you won't leave any marks and you won't damage the plugs. This is where the pry tool mentioned above comes in handy. This video shows how it's done (start at about 3m30s). It looks like he's using a metal tool, mine were hard plastic and looked similar. https://youtu.be/WZx0DuzPpZY?t=213 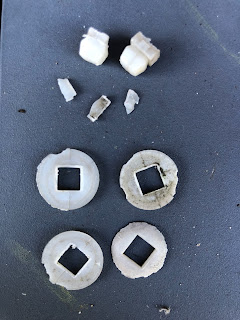 These are the stock grommets from Fiat that came with the car and were completely brittle. The white circular bits fell off outside, everything else ended up in the door and was very annoyingly rattling around. =========================>