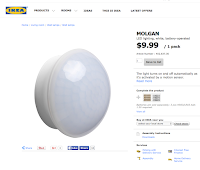 The IKEA MOLGAN is a great little product to provide motion-detected path lighting in the house at night.

TL;DR version: To save battery life, you can make the MOLGAN more sensitive to light by adding 140KOhms of resistance in parallel to the light sensor. This will cause the MOLGAN to only trigger when it's much darker than the stock setting.

I have a bunch of these mounted on the ceiling outside the bedrooms and in the bathrooms so that at night they just come on automatically with a dim enough light not to get your brain out of sleep mode but bright enough that you can see. Because they are battery-powered you can mount them anywhere and they are cheap enough that you can buy a few of them.

My biggest complaint with them is that they take 3 AAA batteries which don't provide much longevity. I use rechargeable batteries and they need to be recharged about every 3-4 weeks. They are light and motion activated which means that they only run when there is motion detected AND it's dark (see below re: IKEA's definition of "dark").

Increasing the longevity (time between recharges) could be accomplished either by

Increasing battery capacity is difficult to do without basically creating a new case for it. Using 3 AA batteries or even a single 16850 Li+ battery would require heavy physical modification of the case.

Reducing the run time with each trigger wouldn't gain much since the light runs for about 30 seconds per trigger and making it much shorter than that would be annoying.

Reducing the brightness could be an option, and it would be quite simple to remove one or more of the 5 LEDs on the circuit board.

I opted to try to solve the "darkness" problem. IKEA's design means that it does not need to be absolutely pitch dark for the light to come on. This means that it often comes on unnecessarily when it's actually quite light inside (i.e. early morning, late afternoon). 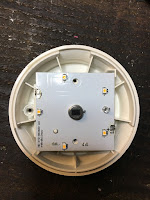 Opening up the MOLGAN is quite simple. You just pry the face (the part where the light comes out) off. It's lightly glued in and it's easy to put it back. You can pry it off with a flat-head screwdriver without even leaving a mark. When you do so, it looks something like this on the left.

What you are looking at are the 5 SMT LEDs around the edge of the board, the motion sensor in the middle and on the right edge there is a clear component that looks like a LED which is the light sensor. 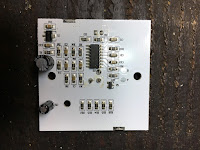 If you remove two screws and unsolder the battery contacts you can remove the board and it looks like this on the other side.

Here you can see the BISS0001 which is the chip in the middle of the board. It's a very common controller for battery-powered PIR controlled devices.

The trick is to change the range of the resistance of the light sensor so that "darkness" is triggered at a lower ambient light level.

If you remember from high school physics/electronics (or just find out by Googling around), it's very easy to reduce the resistance of a resistor by adding another resistor in parallel. 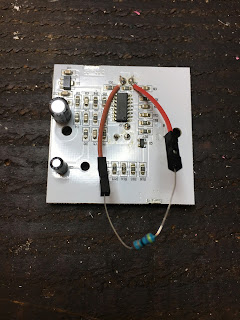 For me, the simplest was to just use trial-and-error with some resistors I had lying around. 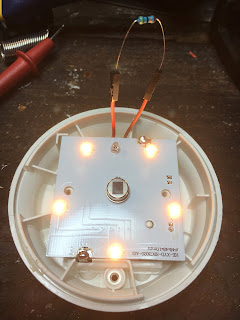 To make it as simple as possible to find the correct resistance by trial-and-error I soldered some DuPont wire with female ends to the light sensor pins so that any resistor I add is in parallel.

With a very slight bit of case modding (just cutting back some plastic) you can fully re-mount the board and solder back the battery connectors. The next photo shows the MOLGAN back to fully functioning condition but with the addition of a "breakout" area to add additional resistors in parallel to the light sensor.

Playing around with some resistors I had lying around I quickly found that 130KOhm was about the lowest I could go where it would still trigger in total darkness. I went up to 140KOhm and that was quite reliable even in a room that wasn't pitch dark. Because I was just using parts that were lying around, to do 140KOhm I had 3 resistors (100K+20K+20K) Going up to 168KOhm was also quite acceptable and allowed me to use 2 resistors that I had lying around (100K+68K)

I then re-mounted the MOLGAN with the additional resistors on the ceiling to do a bit of testing and see that it was behaving as expected. 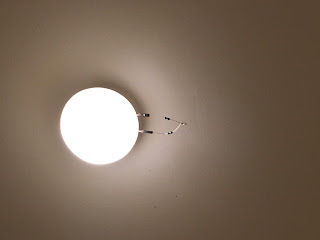 After a couple of days of testing, I was really happy with the new calibration for the darkness trigger and modified the rest of my MOLGANs with a more permanent mod. 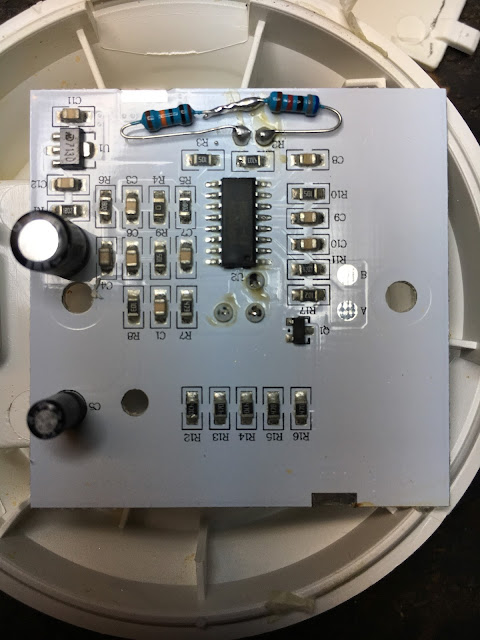 And there you have it, with a 100KOhm and 68KOhm resistor in series added in parallel to the light sensor. By not triggering when still pretty light in the room, I'm hoping that the batteries will last longer before requiring a recharge.

For a particular room where I wanted the MOLGAN to come on only when it was very dark (since it got tons of false triggers from people walking past the open door) I went with the 140KOhm option which really cut down on the false triggers. With 140KOhm, the MOLGAN only comes on if you've entered the room and almost completely shut the door.
Posted by ambor at 2/17/2017 11:24:00 pm