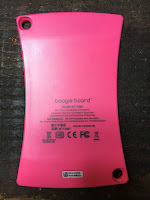 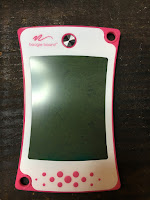 During a recent trip to Costco I bought my daughter a Boogie Board WT13087 (Jot 4.5) by a company called Kent Displays as a bit of an impulse buy. The way they are packaged, you can test them out in the store and the one my daughter picked was working fine.
Within about a half hour of arriving home; however, the "erase" function stopped working. This is a fatal problem because it's the only way to erase the screen. The whole point of this device is that it can be re-erased many time. 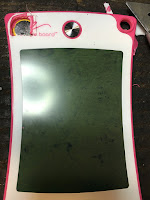 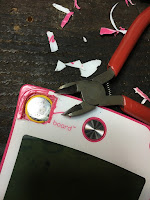 I did a bit of hunting around the internet and clearly this is a problem that others have experienced. I figured that since you could use it in the store, the battery might have died from overuse by other customers playing with it and testing it out.

It's also very clear from Googling around that the battery is definitely not replaceable. The closest I could get to a successful YouTube video on this was here: https://www.youtube.com/watch?v=_k1lcq8LA5E - but alas this guy managed to ruin his Boogie Board in the process. The good news was that from the video, at least I could find out where the battery was. Instead of doing a full disassembly, I thought I would just target the battery.

I used a box cutter and snipper to expose the battery and I figured this would be an easy fix to replace. 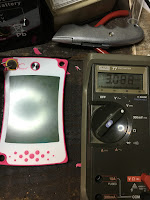 Lo and behold, the battery was fine, showing a full 3V... argh! Incidentally, it's a CR1620H. They definitely don't make it easily replaceable, but if it were just a battery issue, it's doable. 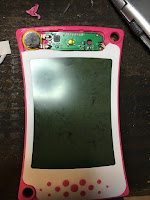 As it wasn't the battery, I continued opening it up to expose the circuit board. Maybe something was wrong there.

It actually wasn't too hard to expose the rest of the circuit board. The trick is not to let the plastic peel off the screen. 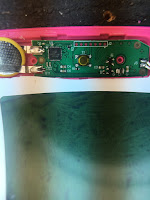 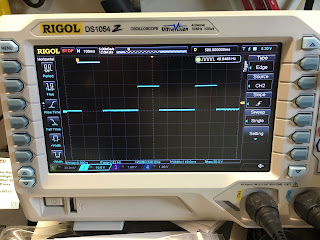 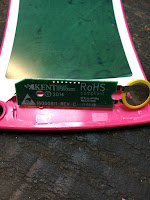 As you can see, the board is pretty simple with the power going in from the battery to an unidentified controller and a button to activate it all. The output of this board goes via two wires to another board at the bottom of the screen. I stuck my scope on the output wires to see what was going on when the button was pressed. 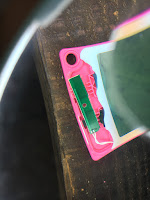 So that didn't get me any closer to solving the problem, but at least I knew the top board was doing something in response to a button press. 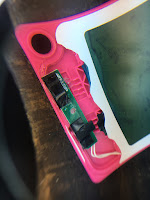 If that's all that it does, I figured that I could erase the board by sending 35V to the screen in a short burst followed by two more pulses. 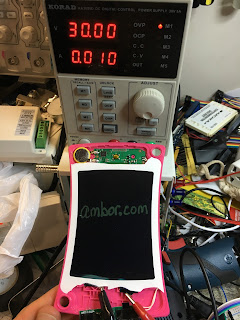 Sure enough, it worked! Sending 30V to the screen erased it. See the video below for the full show. It turns out, you just need to send it 30V and it's not very sensitive to how long you do it for. Also, it doesn't really care about the 2 additional 19V pulses either.

So, in the end it had nothing to do with replacing the battery (although if that's what your problem is, then it's pretty easy to do). It's likely that due to some manufacturing defect, the connection between the screen and the bottom circuit board was flakey. I checked that the whole rest of the device (from the battery to the bottom circuit board) was fine. The screen itself is fine.

Now that I've "fixed" it, I have a slightly less portable version. The big lesson here is that if you are one of the many people who find that their display no longer erases, it might not be the battery. You might need to check for a good connection to the screen. This is located at the bottom (the side without the button). You could try pressing on various sections of the case to see if you can correct the bad connection.

Epilogue: I contacted Kent Displays and after a proving that I have a defective product (receipt and some photos) they sent me a new one free of charge. The new one they sent is a model WT13087B (note the B at the end). It's otherwise looks identical and after a few days it still works! See photo below of the old (right) and replacement one (left). 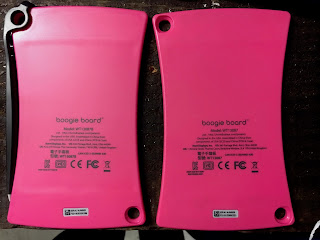