What a difference 20 years makes! 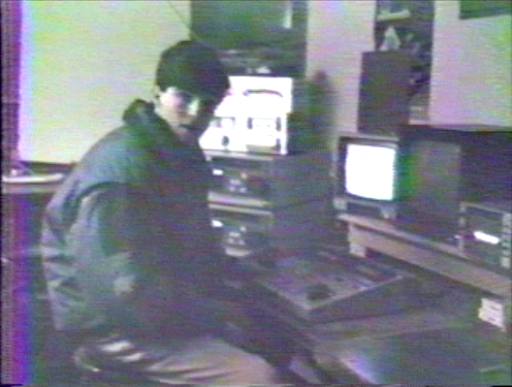 Recently I saw a couple of YouTube videos from Phillips Academy High School students [here] and [here] that blew me away (the second one has a slow intro)...
In 1990 when I was at PA, I enrolled in a course on Computer Art. I don't remember the exact name of the course, but it was taught by the late Diz Bensley who was at the cutting edge of teaching art with computers (in those days, calculators were still banned in math class).
In that course, I created a video entitled Orbs Ex Machina (click to view it) as my final project. Seeing the modern YouTube videos, I decided to dig out the old tape and upload it to YouTube for comparison. Obviously the picture quality has degraded substantially over those 20 years of storage on a VHS tape from Kmart.

For those interested in the equipment I used, it was shot on a Panasonic PK-957 video camera that used a pickup tube instead of the current CCD technology. The video was shot onto VHS tape and then the graphics were overlaid on my own Amiga 2000 and an Amigen Genlock. I also used the school's 286 Zenith "IBM AT Clone" fitted with a Truevision Targa Board.

The video was shot entirely on the Phillips Academy campus (at the mail room in GW Hall and outside Kemper Auditorium - neither of these two areas exist anymore due to renovations).
Posted by ambor at 1/23/2010 03:24:00 pm

Email ThisBlogThis!Share to TwitterShare to FacebookShare to Pinterest
Labels: history