A glimpse of the Moscow Metro 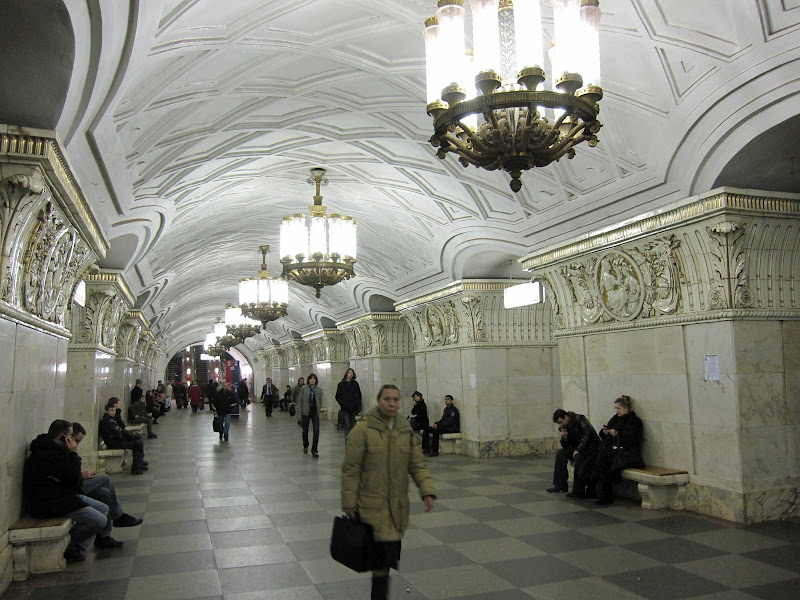 Over 20 years ago, in one of my Doherty Jr. High Social Studies classes I remember Mr. Eiserman mentioning the Moscow Metro and showing us a picture. I don't even clearly remember the topic of the class, and it may not have even been Mr. Eiserman's class, but the picture of the metro stayed etched in my mind and has since been a source of fascination ever since. I'd been to Moscow (including the obligatory rides on the metro) on a number occasions since then, but never with any sort of camera equipment that would work well (and discretely) in the low light of the metro.

Click here to see a photo album that shows some of the incredible architecture of the stations themselves. I don't even know if you're allowed to take pictures, so these were all done fairly discretely - so excuse the poor composition on some of them.

YouTube video demonstrating the frequency of service. This is a 4 minute clip, see how rare it is to have no trains at the station.

YouTube video demonstrating ridership. This is how you get 7 million people per day through the system.

The metro is a true work of art built during a time of rapid development of Soviet society. Moscow was intended to be the capital city of the world proletariat and as such needed an efficient way to carry the millions of the city's workers. Today's Muscovites (7 million of them a day) travel on the nearly 300km of track across 12 lines and 177 stations of the system. The Soviet leaders also wanted to use the metro to show off the great artistic skill of its people to the outside world and also to celebrate their achievements with the people at home.

The operational scale of the system is impressive. On average across the network, a train arrives every 90 seconds. In practice, downtown stations have an even shorter headway. There are timers on the ends of the platform that indicate the number of seconds since the last train's departure - so you always know how long you're likely to wait. Check out the video below: