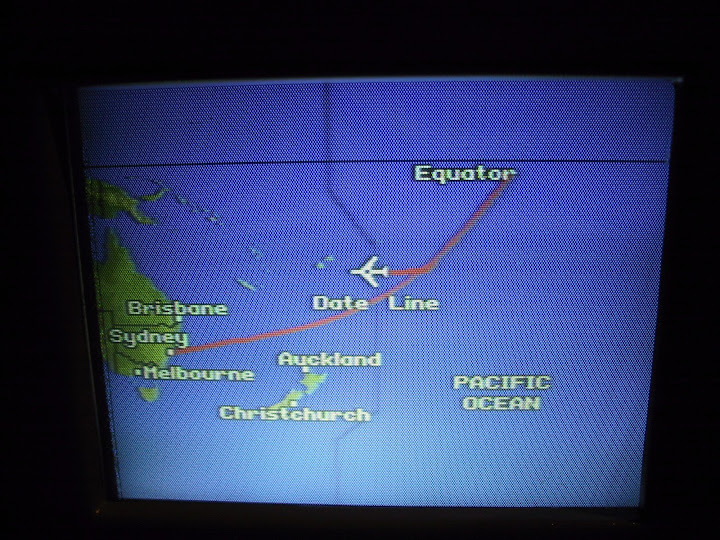 I recently read that Air New Zealand's first Boeing 747-400 (ZK-NBS now 19 years old) will be sent to the scrap yard. In fact, it is the first 747-400 of any carrier to be 'scrapped' - every other -400 built is either active, stored or has been written off (like this one). This marks the beginning of a long sunset for the iconic Boeing 747-400.
I've only had a brief encounter with ZK-NBS, but it was one of my more memorable flights. On July 28, 2001, I left Sydney on a round-the-world ticket headed for Los Angeles and ultimately New York to attend my brother's bachelor party. The plan was then to continue to Atlanta the following week for the wedding and from there to Moscow to attend MAKC and then back to Sydney. Settled into my comfy seat, the trip progressed smoothly for the first 8 hours. Then, lightly dozing in my seat, I noticed that we were making a fairly wide left turn. I first thought we were going around some weather but soon I saw this on the screen and knew something more complicated was happening. I also noticed the flight attendants walking down the aisles and row-by-row waking people up to tell them something. When they got to me the story was that an engine had to be shut down and that we were diverting to Auckland. The stated reason was that Air NZ had a maintenance facility there (but didn't want to divert to HNL instead?). Then another couple of hours into the flight heading back the wrong direction, I see this on the screen. Several things were going through my head, but one of them was that AKL was no longer our final destination. The captain then came on and said that due to the strong headwinds we would no longer have enough fuel to make it to Auckland (nor back to Sydney). So, off we went to Nandi, Fiji (NAN) - landing there after nearly 14 hours of flight time (in 14 hours we could have made it to LAX in the first place!!). The landing was smooth as silk and gave no hint of being done on 3 engines. We were greeted by Fijian customs who set up 2 lanes for "Fiji Citizens" and 2 lanes for "Crew/Other". As there were no Fiji Citizens on board, 2 of the customs guys had a pretty easy time watching everyone else go through the other customs line. That night we all split up and were sent to various resorts on the island. I was also to miss what turned out to be an epic bachelor party in New York. The next day we were told that the engine could not be repaired and that they were diverting another plane from AKL to pick us up. It turns out they sent two (the AKL-HNL flight and the AKL-LAX flight). The passengers on those two flights were only told of their side-trip to NAN after they had departed AKL and were not too happy to meet us in NAN. The other issue was that NAN didn't have enough supplies (or maybe there was no time) to fully cater the aircraft and that night we left NAN bound for LAX with just chips and Coke for the entire flight. Having an entire day in Fiji was fun (but not as much fun as the bachelor party turned out to be) and I managed to also get a few pics of the plane being repaired. Including this one as I boarded the replacement flight to LAX. A little while later (late September 2002), ZK-NBS had another in-flight engine shut down and someone from the NZ Herald newspaper tracked me down based on my photo on airliners.net. Apparently ZK-NBS had (according to the reporter who contacted me) "a string of safety incidents." They bought the rights to use the photo and also interviewed me for an article with the catchy headline "Third air scare for jinxed jumbo jet" (see the full article here), but never used the photo. Ahhh fame, I hope I didn't let it get to my head.
Posted by ambor at 5/31/2009 04:10:00 pm