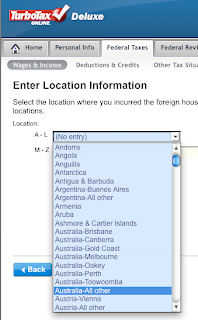 I was filling out my U.S. taxes this morning and needed to enter the location where I incurred my foreign housing expenses. Although I suppose "Australia" would have been sufficient, it seems that they want me to be a bit more specific.

I live in a small town called Sydney which some believe is the capital of Australia. To avoid making me type it out, TurboTax conveniently provides a drop-down menu where I can select one of 7 cities or "All Other."

I naively might have thought that they'd just use the top-7 largest cities. Oddly, they went instead with some other system that includes the Gold Coast (fair enough, it's the 6th most populous city in Australia) and Toowoomba (15th most populous). Most puzzling, however, is that they also included Oakey, a rural town situated 160km west of Brisbane with a population of 3,657! HUH?

I think I'll pay a visit to Oakey next time I'm in rural Queensland - after all according to the Wikipedia page it boasts several amenities including an Olympic-sized swimming pool and golf course. Apparently there are several motels and hotels in town providing accommodation, as well as a caravan park catering for tourists. Most conveniently, if I work there, it will be easier to file my U.S. taxes!
Posted by ambor at 2/15/2009 05:07:00 pm

Email ThisBlogThis!Share to TwitterShare to FacebookShare to Pinterest
Labels: strange